Contribution of Microfinance to GDP in Bangladesh

He congratulated all for a wonderful scientic paper. He mentioned that numbers of study has been done to see the 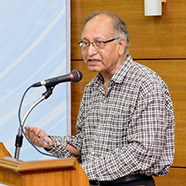 micro level success of the microfinance programme. But this macro research will be the pioneer one in the history of Bangladesh microfinance sector. He also said from the model it is difficult to find out the exact result since model can not calculate the real life complications. If one can calculate that the contribution would be higer than 6 to 8 percent. This type of research should go on. He also mentioned that indirect contribution through financial sector development should incorporate here. If these points are missed huge impact might be missed here. 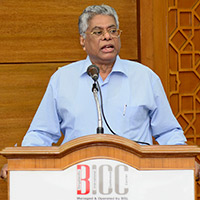 He said it is important to mention few points regarding microfinance. Microfinance has huge impact on households income, livelihoods, GDP, poverty, health and so on. Microcredit in Bangladesh is compare to other countries are completely different one. He mentioned that in India Self Help Group model is dominant. Here in Bangladesh it is group based. In the history of microcfinance only Bangladesh has Microcredit Regulatory Authority. In 2011 a bill was raised in parliament of India which is not implemented till date. Only Bangladesh has regulators. We does not operate micro credit as commercial basis.

Early 1980s, scholars used to say microcredit has no impact and value addition in GDP. But the notion is changing. Now PKSF disburse more than 35% of its total disbursement in the real sector. Whichever value addition is happening intermediary stage every stage is part of GDP. Microcredit productivity is extremely high and in his opinion we all should accept it.

This is a pioneer work and here a complex reality is presented in an effective manner. He suggested these types of work should go on.

He raised as question ‘is this growth enough’? He also mentioned that in which way it can be increased that option should be incorporated here. He mentioned that earlier microcredit, in case of emergency people used to take loan from informal money lenders at very high interest rate or used to sell land, gold or livestocks. Needless to say that these hundreds years traditional practices has been changed because of microfinance. He also mentioned that microfinance definitely has a postive impact on GDP and in his opinion the percentage should be more. He suggested that this types of research must go on.

He said, Through this research our assumption got an extra estimation. And it is also found that MF sector is investing more in Agriculture sector and it is creating huge impact in GDP. For policy implementations more desegregated versions are required like impart on human development, education, poverty inequality, price of capital, rate of interest, and impact on rural employment. if these can be found, to prepare priority based policy would be easier. As per Bangladesh Bank rules, all commercial banks have to invest on SME financing and Agriculture. Bank provides trhese loan through the MFIs, So if there are any duplicacy, that should be identified. Lastly he mentioned these information will be useful for all and more researches are needed to be done in this regard.

Mr. M. A. Mannan, MP, Honorable State Minister, Ministry of Finance and Ministry of Planning, Government of the People’s Republic of Bangladesh

He said, we agree that microfinance does contribute in GDP which is obvious. As the funding is increasing day by day ofcourse there should be a positive consequesces. This study proof that as well. He mentioned that, now it is our responsibility to help the prosperity of the microfinance programme. He believes any productivity should matters and be counted. Lastly in his concluding remarks he mentioned this study will be really helpful for the Government.

He thanked InM for arranging such a wonderful session. He mentioned that this is the high time we should detag the word micro from microfinance and incorporate appropriate finance. He said that in his opinion the 1st generation microcredit is over and these 2nd generation microcredit can not or should not be operated with the same formula. Microfinance is not only limited within the credit system. It is taking care of the education, training, health and sanitation, insurance and other relevant matters as well. For livestocks it has shown a good success, more focus is required in the field of crops and health. There is no doubt microfinance is contributing to national GDP but more can be done in this regard and this is the high time to start working effectively along with the Governement. Need to spread hand towards those who really needs the credit along with proper incentives so that more contributed could be depicted in National GDP.